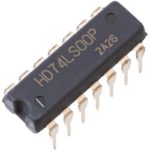 The 7400 circuit contains four 2-input NAND doors, its use is widespread in Boolean algebra to implement the functions. With these logic gates we can reverse a signal or generate a logic to activate another integrated circuit. We can also build an Asynchronous RS Scale with a pair of doors, as we can see in the attached scheme.

The 7400 circuit and its variants, is one of the most used in electronics, when it is necessary to implement functions that use many NAND doors and the circuit when it is not home or test mainly PAL or GAL memories are used, which are integrated circuits that We can record the result in a programmable logic matrix using a universal programmer.